One of my fellow bloggers is having a contest and the prize is the cutest little Pie Pop maker. I've never seen these before but LOVE, LOVE, LOVE!!! Wonder if they'd work over a campfire? Head on over and check it out:  http://www.mysteryloverskitchen.com/2012/06/pies-and-prejudice-pimping-contest.html 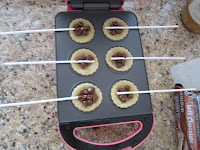 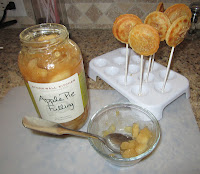 We just finished a weekend of camping at Wallace State Park near Cameron, Missouri, about 45 minutes northeast of Kansas City. Wallace holds a special place in my heart, as it is the place where we first started camping. I prefer it to the closer (and more popular) Watkins Mill. Wallace just feels more rustic. The basic campground #1 offers lovely shaded sites with roofed picnic tables, wood chip tent pads and a fair amount of privacy. Make reservations and try to get a site on the outside of the horseshoe – the inner circle carries noise from nearby campsites. For even more privacy, three walk-in sites are available just a few hundred yards off the main camp road. The camp host is happy to loan you a pull-cart to carry your gear. Wallace also offers some easy and very scenic hiking trails, and Caleb really loved the lake for swimming!

I highly recommend a day trip to the Amish colony at Jamesport, home to the largest Amish settlement in Missouri (about 150 very large families). The drive is less than an hour from Wallace.  As you approach the town, you’re sure to see any number of horses and carriages. Go into town and pick up a map at any of the specialty or antique stores there, as most of the real Amish businesses are on outside the city limits (but while you’re in town, I’d recommend stopping by Wholly Cow for some delicious fudge and frozen custard).

Caveat on the map: the scale is deceptive. We kept driving around trying to put the map into perspective, expecting the businesses to be within a mile or two of city center. As it turns out, they’re five to ten minutes away. I picked up some amazing artisanal cheeses at the Homestead Creamery, and do not miss a trip to the H&M General Store and Countryside Bakery. It has Amish baked goods, cheeses, spice mixes and bulk foods of every kind at very reasonable prices. I sampled some okra chips; I’d never seen or tasted anything like it, but I’ll definitely eat it again. Caleb and Bill both delighted in the creme-filled eclairs from the bakery. If you’re into sewing or quilting, the fabric shop next door offers a broad and unique selection of textiles and handmade goods.

Step back in time and explore the countryside.  You will likely see farmers working the fields with horse-drawn implements. We spied a group of women in bonnets circled around a beehive, collecting honey. You will notice that the degree of “modernity” varies among the families but one thing was true of all: the Amish people are just lovely, full of graciousness and exuding happiness. They are poster children for a simpler life.

Back at Wallace, Caleb and Bill headed to the lake for a swim while I started prepping dinner in the Dutch oven. I have a few recipes in mind for the cook-off and this weekend was intended to set a baseline, a place to start and then tweak as necessary. For the main course, I took my French Country Chicken recipe and gave it a Mediterranean spin, kind of a cross between my Mom’s Spanish rice and a paella (minus the seafood).

The chicken was delectable but the rice mushy. It’s a conundrum – I prefer bone-in chicken because it creates its own stock and the meat is much more tender, but it takes time longer to cook than rice does. Also, I typically brown and soften vegetables over the gas stove before placing in the Dutch oven but, for purposes of the contest, the dish needs to be truly “one pot.” I had to cook the bacon, brown the chicken and soften the vegetables over a lot of coals to reach a high enough temperature. By the time I put the lid on the DO, the ingredients had reached a rolling boil and stayed there for some time. That worked for the chicken – it was falling-off-the-bone tender and juicy – but the rice was overdone. Next time I will try adding the rice later on in the cooking process. The flavors were otherwise perfect, a peppery-sweet-garlicky bit of heaven.

My bread pudding, on the other hand, couldn’t have been much better. As Bill said, the universe has probably presented me with the best bread pudding I’ll ever make, an aspiration rather than a baseline, and a recipe on which I'll fail miserably come contest time. The only thing I'll do differently next time is use a little sturdier a bread. I bought Italian loaf and it became a spongy custard, rather than maintaining its chunky cubes. Other than that, my baseline made the final cut so it's time to start thinking about my entry in the Side Dishes portion of the Dutch Oven Cook-off.

I was sleeping hard when Bill woke me around 1 AM to tell me he heard a sound. I couldn’t find the lantern but somehow managed to carry the food from outside into the tent. I forgot about the trash and we awoke to a nice mess courtesy of some friendly raccoons. I hope their meal was as good as ours!

Final note: my Dutch ovens are toast after this weekend. I'll post pictures later, as I clean them. I used my new (pre-seasoned) Cabela's DO for the chicken and some of the rice stuck to the bottom, while the acidity in the tomatoes probably ate at the seasoning as well. I tried to burn it out but ended up with a bigger mess. My older oven didn't fare much better. I'd lost some of the seasoning last year when my Mom attacked it with a metal utensil. I cheated on the bread pudding and used a liner, which is totally a no-no for competition. Hopefully I'll find some time in the next few weeks to attack them with some steel wool and re-season.

Something quite spectacular happened yesterday.

I  spent Memorial Day this year writing an essay for the Coleman Camping Heritage Essay Contest.  I had discovered the contest on the Internet and became inspired to write about my love of camping, and of Coleman gear, and how that had encouraged me to get my son back to nature.

I didn't grow up with a camping family. My dad is a no-nonsense farmer and we already lived in the country. He spent long days in the fields during the summer. I suspect that what he most cherished when he got home after dark was a soft bed and a good night's sleep. I can still hear him my head "If you want to get closer to nature, we can just move your bed out to the cornfield.".

That's not to say my dad isn't an outdoorsman. He's an avid hunter and in his retirement, has probably spent as many nights  in the wild and hiked as many miles as I have.  When you walk into my parents' living room, you are greeted with a gigantic elk head, a trophy from one of his more challenging hunts. So while I probably inherited a sense of adventure and a love of nature from him, it was not something that we shared together.

My real camping adventures began in Girl Scouts. with Brenda Harriman and Peggy Burfeind as our fearless leaders. Every year, they and twenty or thirty girls set up camp in the woods behind the Burfeind farm and spent two weeks living in the "wild."  Despite being within a few hundred yards of electricity and indoor plumbing, we set up a full camp, built fires and dug latrines.  That's where I learned to make cowboy stew, and dump cake, probably my first Dutch Oven recipe and one I still love to make (and eat!).  Beyond that magical two weeks, we took numerous trips throughout the year. Maybe my memory has embellished a bit, but it seems like it always rained when we took our trips. I remember girls shrieking "Don't touch  the walls" of the tent, the sole nugget of wisdom that prevented us from becoming hopelessly soggy. According to legend, any spot where a hand found itself would open up to the downpour, (Truth be told, on the wetter nights, one prayed to be one of the lucky girls to first stake a spot in the back of the Harriman's old station wagon.)

We spent the non-camping season working on our merit badges, to be awarded during the final night of camp, Family Night. I will never forget my mother laughing from the crowd when I was given the Housekeeping Badge. She was right to be amused; I still don't merit one of those!

Without Peggy and Brenda, I would not be the camper I am today. They taught me to make a fire, to tie knots, to stake a tent and, of course, to cook outdoors.  My love of the outdoors grew from the love they shared with us. The precious time they devoted is priceless, a shining example of the community spirit that made my small town of Malta Bend, Missouri, such a wonderful place to grow up. For their dedication (and that of all the parents who devoted time to making sure we country kids were never bored), I will be eternally grateful. They are my inspiration.

So, back to the contest. Yesterday I was notified that I won, and will be rewarded with more gear than I may be able to fit into my car. (A little irony, I told someone just last week that camping was sure a lot easier when I just had a tent and sleeping bag to take with me. Of course I was joking; one can never have too much Coleman stuff!) As Caleb so perfectly stated when I read him the list of prizes: "Mom, we're rich with camping gear!" I see a beautiful future with Caleb and my old friend Coleman.